One of the things that I have to be most thankful for is the speed technology has evolved in the last decade.  If it weren’t for tablets and the Internet, the husband and I would have had such a struggle maintaining our relationship pre-marriage.  If it weren’t for those nifty gadgets, I would not have had the chance to get to know my nieces and nephews abroad.

Waiting for the doctor :)

Juliana is one of my nieces, and I think she’s the first that has grown accustomed to seeing my face on a tablet.  I don’t know how to properly describe it, but it looked to be that it was so normal for her to just see me through her iPad.

She’s visited us in the tropics before but I think the most memorable one was in 2013.  We had just buried Tatay mere weeks then.  I remember that out of body feeling, that everything wasn’t real yet.  But they were coming home.  That, for sure, I was happy about.  I remember asking my boss if I can take half of the day off, since their flight comes in at noon.  My brother Ted already skipped the day to pick them up, and our youngest brother Daniel was right on time to swing by my office. 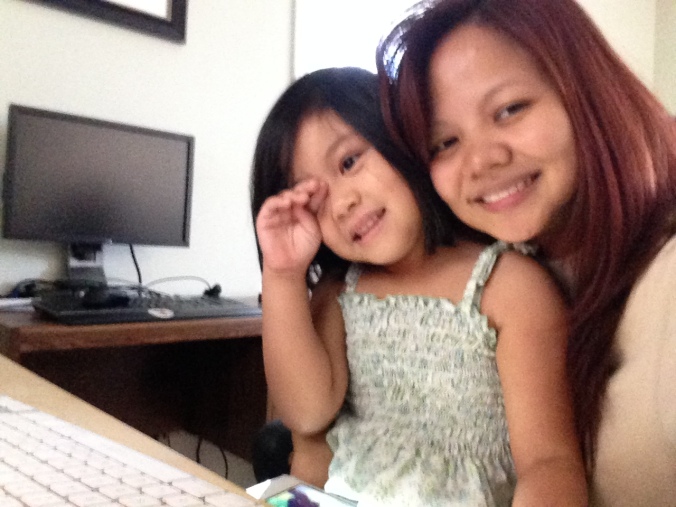 I was a bit nervous coming home; I didn’t know how she’d react upon seeing me.  Even now that I am an adult, I fear rejection so much, especially when it comes from kids.  Something about being disliked by children makes you feel extra crappy than being disliked by adults.  It’s like their senses tell them they cannot trust you.  I was just so nervous.

That anxiety, combined with my grief desperately (but well) hidden, made that day too emotion-ridden.  But you can’t pause days.

It was a hot day, and my mother has laid out a feast of shrimp, beef broth, barbecued pork belly and fresh mangoes for our balikbayans.  Daniel honked the horn as we approached our house, so I knew she’d be aware that someone was coming.  Half sweaty, half sticky, I walked into our house and saw Juliana, then 3 years old, with a huge grin on her face.

“You’re not in an iPad anymore,” she exclaimed.  I walked up to her and she didn’t even hesitate throwing her arms around me.  I swooped her up in my arms and said, “Hi.”

I don’t know about you, but that to me is a perfect meet-cute.

Juliana at school, end of 1st Grade. They grow up fast.

So I wanted to take some time off from the lazy nothings of this blog and urge you to #WearYellowForSeth.

Seth Lane, age 5, is a British “bubble” boy.  Born with almost no immune system, he has to live constantly in a sterile environment to avoid infection and other diseases.

I don’t know about you but anything that has the word “sterile” in it is hardly fun.

Huffington reports Seth is in The Great North Children’s Hospital in Newcastle, England, awaiting a bone marrow transplant (a second attempt after the first one failed).  He’s been there since January.

Now, Seth’s parents are making the rounds in the Internetverse, urging everyone to wear Seth’s favorite color on March 27.  They plan to print out the photos with the hashtag #WearYellowForSeth and pin on a laid out map where the photos come from.

Who can resist this?

To know more about Seth and his journey, visit his blog.

SCID affects about one in 100,000 babies in the U.S., according to Be the Match. There are more options available for children with SCID now than when the disease entered popular culture in the 1970s with the famous “bubble boy,” David Vetter. — NY Daily News (link)

Do you still believe in postcards?

I ask this question now because as of late, I’ve been travelling a lot.  As of late, my niece Machiko Skye has been learning to write.  With a command of language and comprehension beyond her years, she never fails to ask for a postcard whenever she would hear about my departures. 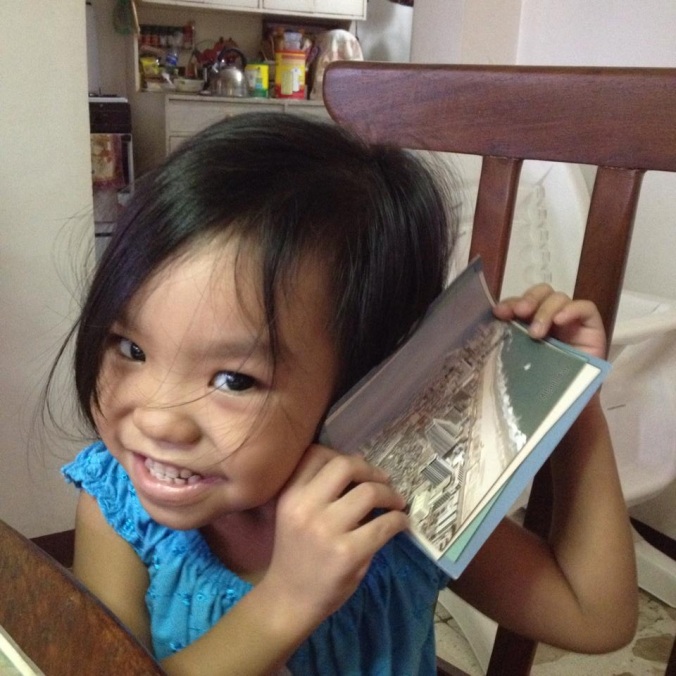 My Paris trip definitely amped up my creativity.  The City of Lights were not short of picturesque postcards.  I immediately sent her a couple, and if it weren’t for the faulty postal service in the Philippines, it would have arrived before I came home. 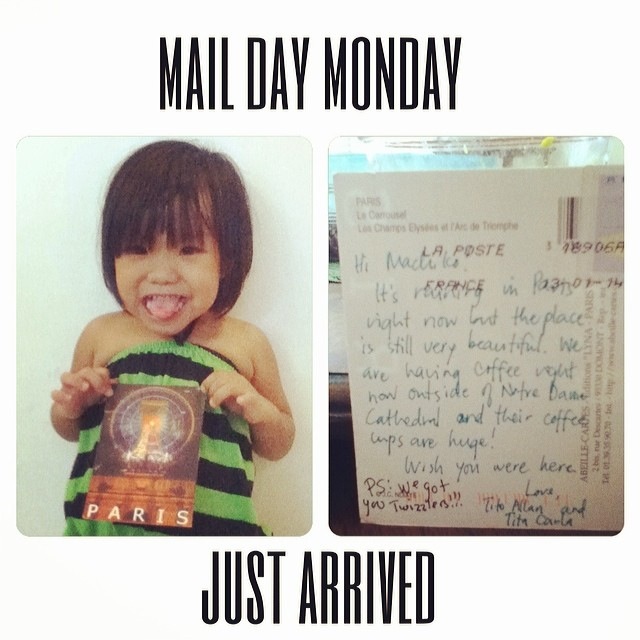 During my NJ visit, Machiko wrote letters for her cousins.

The NJ kids enjoyed it so much, we actually had a letter writing day just so they can reply to her!  And she was more than happy to read them! 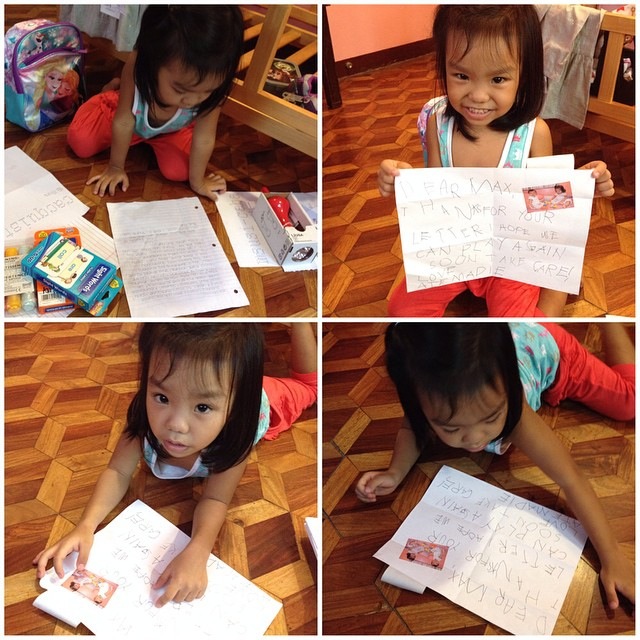 The advent of technology is phasing out the relevance of stamps and mail couriers, but there really is no better way of practicing handwriting, communication and interpersonal skills more than letter writing.  I’m very blessed to have so many of my family still in love with old school pen and paper.  Even the little Jared Franco.

So… do you still believe in postcards?

So the last three weeks came and went, and I am now back in the Philippines.  As much as it breaks our hearts (hyuck), Le Beau and I are back to regular programming, Facetime and iMessaging forever.

But then I cannot deny the joy of dating him for the last three weeks.  It was absolutely divine.

What I am most enthused about is the time I spent with my nephews and nieces.  I don’t think I would have gotten to know them well if I didn’t take this vacation.  I now have new breakfast buddies and new park buddies. 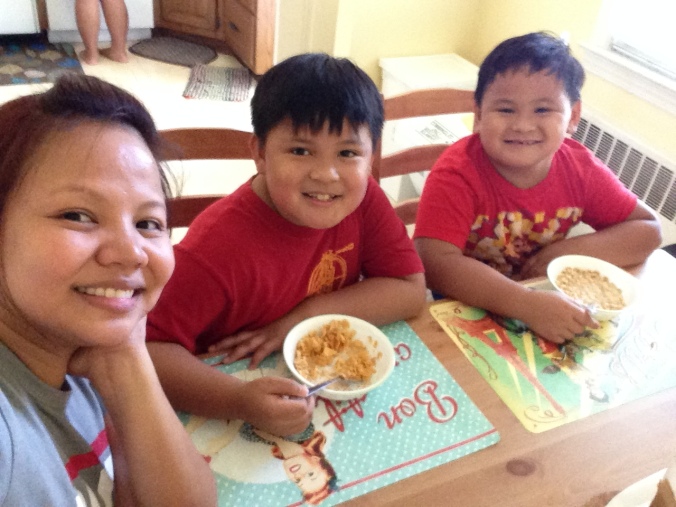 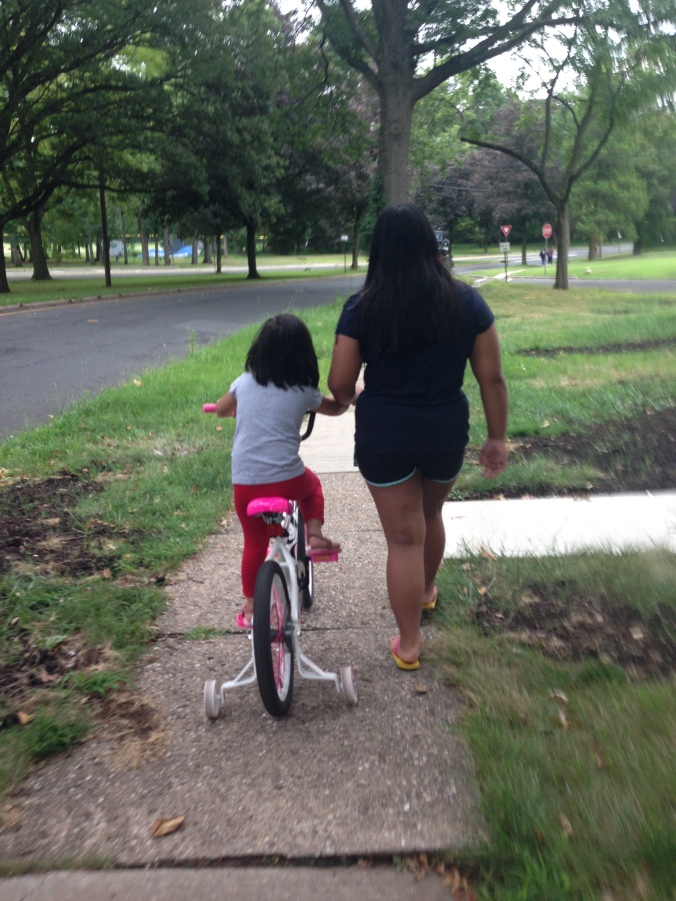 I got to take care of the youngest member in the family, the beautiful and fast-growing Olivia Mackenzie.

I am so ecstatic to be part of this memory.  I remember her visit from last year.  She welcomed me from work, I came home past lunch time.  The first thing she said, “You’re not in iPad anymore!”  Ah, Lily.  <3 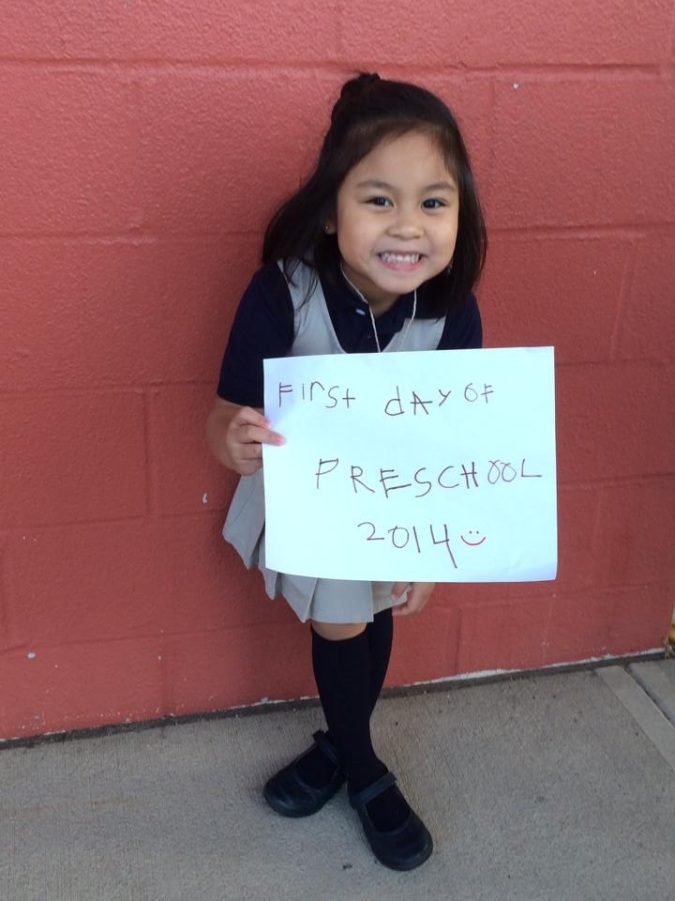 I met Le Beau’s best friend and his family.

I never imagined that I will be back in this house after ten years.

But then again, I never imagined this either. 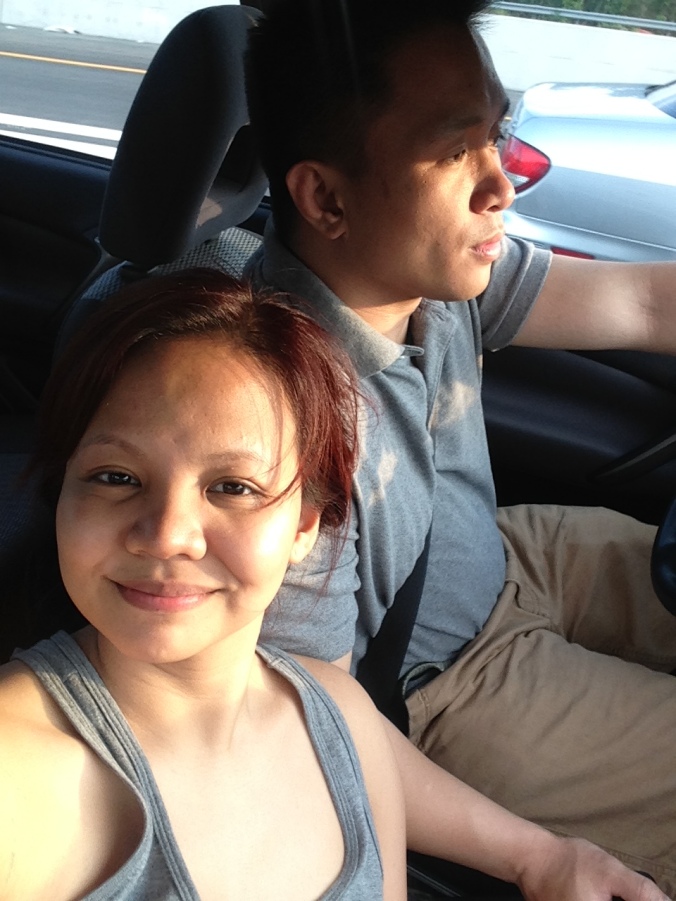 Life sure knows how to surprise you.