Those who know me well know I gravitate towards anything with a discount.  And I got that from my mother.

I wanted to drag her all the way to Megamall, because of their humongous sale.  Even Forever21 is on sale.  Somehow, she developed this trauma being in Megamall so that idea is soon junked.  We went to the adjacent malls in Makati and went for a stroll.

While strolling, I saw the shoes I want to get for Dylan.  I wonder if he’ll like it.  I like it because it looks so clean and posh and sleek.  I don’t want to waste the money, so I better make sure he likes it before getting it.  Hahahaha.

Actually, it wasn’t supposed to be just a stroll.  We were supposed to look for gifts.  I found mine, but she didn’t.  Apparently, the gift she wanted was too expensive.  Then again, I reminded her, maybe everything in Makati is expensive. 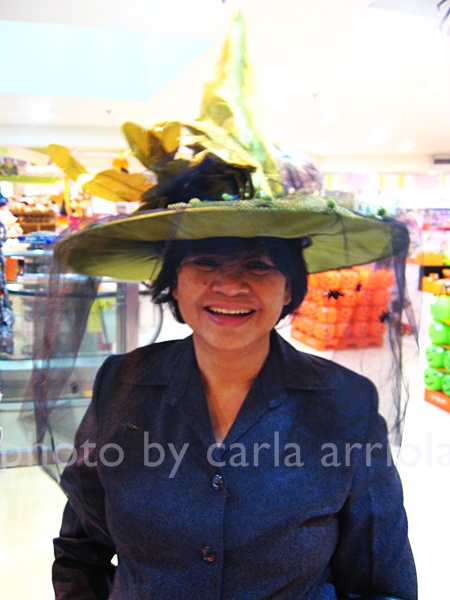 I honestly think my mom loves the mall like a teenager does.  Sometimes, she would complain about walking too much, but last night, she was just thankful for having bought flats.  I think we spent two hours just looking at clothes and debating whether or not we get it.  But eventually, we decided to not buy anything.

Ended up eating at Chowking.

As seen above, my mother is a very serious texter.  Hahahaha.  And she does this thing where she mouths whatever it is that she’s texting, as if checking if it sounds right (when it shouldn’t be a bother, because they’re going to read it, not hear it).  So there.

And that was our date.  Weird huh?  At least we got to fit really pretty hats. :)