I’m not really the go-to authority when it comes to recipes.  I grew up with my parents’ cooking, which is mostly based on approximation and seasoning to taste.  So basically, this is not the hard and fast rule when it comes to making this delicious spread.

I actually created an enemy.  Given that my brother’s wedding will be by the end of the year, I only have so many months to get into the habit of eating right and becoming more religious in exercising.  But there’s an abundant amount of Edam cheese in the fridge and it’s obviously been there since Christmas.  Even though my mom promises to slice it up for us to munch on, it never really came true.

So I dropped by the grocery this weekend and picked up some red pimientos and whole wheat bread.  I figured if she’s not going to do anything about that cheese, I might as well get the hint and start working on it.

The recipe is actually my aunt’s.  I remember her teaching me how to make it way back in 2008 (I stayed with them for an entire year while I work as a creative writer for a noontime show).  I remember it quite clearly:  a little butter for some depth, mayonnaise for spreadability and red pimientos for the taste.

It turned out pretty well actually.  The only hard part was (literally) the cheese itself.  We only had a normal grater so imagine the ages that passed in processing the cheese.  Perhaps it would have been faster if I used a food processor, but you want that light stringy texture.  Nowhere near powdery or fine, but it mixes well with the butter and mayonnaise.

The ball mason jars I got from Pretty Little Cravings proved to be the perfect storage for this spread.  It keeps the spread fresh. 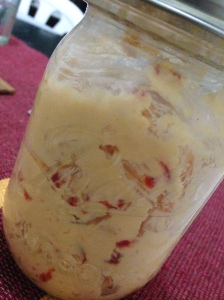 My mom said it needed more pimiento.  I put everything in that small can I bought.  For me, it tastes just right.  You might want to be more careful with the pimiento.  Some spreads end up too red and the pimiento starts to overpower the cheese.  For those who doesn’t have leftover Edam cheese in their fridge, quickmelt cheese would do.

I’ve seen a few recipes where copious amounts of butter and mayonnaise are mixed in, AND THEN still seasoned with salt and pepper.  Mind you, cheese is already rich in sodium, so you might want to rethink the salt and pepper addition.  Moreover, like Joey said, low fat mayonnaise can easily do the job of regular mayonnaise.  Like I said, I haven’t really encountered a hard and fast rule in making this spread so feel free to play around the ingredients listed below.  The amounts indicated are the ones that worked for me.

In a deep glass bowl, grate the cheese to your desired consistency.  Throw in the butter.  (Make sure that your butter is at room temperature.  This will make the mixing  much easier.)  Throw in the mayonnaise.  Dice the drained pimientos finely or to your desired size before throwing it in the bowl.  Using a spatula, mix them all together.  You  may adjust the taste with either salt and pepper, or by adding more butter.  To make it more spreadable, add more mayonnaise. 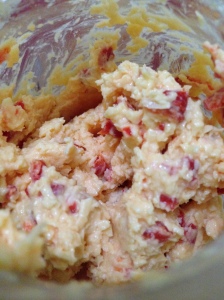 The jar used to be full.  It’s only Day Three and you can tell, I’ve had a little bit too much of it.

How do you make your cheese pimiento spread?  How did yours turn out?