Right before we headed out for a quick visit with friends in Maryland, the husband just had to attend a seminar at AllStar MMA Training Facility, his bjj home school.  He said he must attend because Gregor Gracie is teaching.  Now, being the dutiful wife, I immediately looked him up.  His last name is Gracie, so I already know he’s a very big deal.  The husband has Gracie in his Youtube history, AllStar is a Gracie school, and my brother-in-law’s gi has Gracie all over it.  So yeah, I know he’s a big deal.  I just needed to see how much.

So this was the top search result from BJJ Heroes:

Gregor Rangel, also known as Gregor “Gracie” is a Brazilian Jiu Jitsu black belt under Renzo Gracie and a former world champion in the lower belt divisions who also successfully ventured into mixed martial arts (MMA). Gregor is not a member of the Gracie family by blood, but is the half brother of Rolles and Igor Gracie, both sons of the legendary Rolls Gracie. Gregor has also competed in freestyle wrestling with a notable win over Darryl Christian, a highly accomplished wrestler.

Wow.  It doesn’t end there.  This is a list of his main achievements:

Thoroughly impressed with his resumé, I asked the school if I can come in and take some pictures of the seminar.  They were kind enough to let me in, and the seminar started at their neighbor mat Apex Wrestling School.  Starting the afternoon with men grappling on the floor was something new for me, and this one will be counted as a good learning experience.

The seminar started with Gregor (I feel so close to him now that we are on first-name basis) showing a sweep from standing.  At least that’s what I heard.

He emphasized the importance of form.  One thing that I truly appreciate about jiu jitsu is the fact that each movement leverages on the response of your body without having to exert brute force.  With a thrust of the hip coming from bent knees and feet together, Gregor shows how easily a lift can be done.

Like a regular class, the group broke up in pairs to begin their drills. 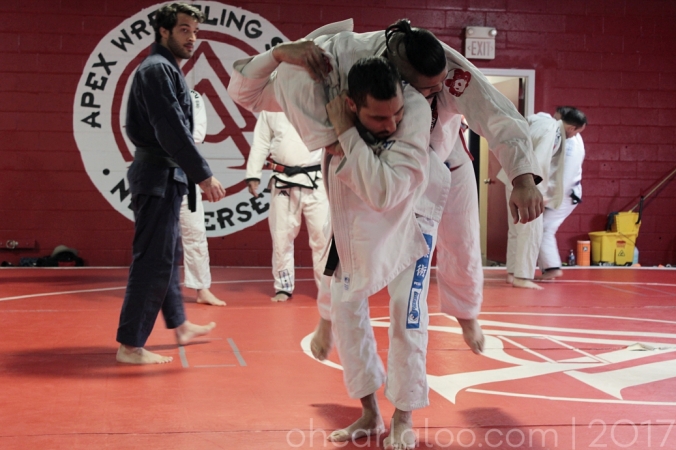 Ever the observant teacher, Gregor walks the mat to observe each student.

I very rarely get the terms correct for this lifestyle.  So you can never imagine my joy when I correctly identified the spider guard!  Gregor exhibited a number of passes and sweeps from the spider guard.

The seminar ran for almost two hours.  At the end, Gregor opened the floor for some more questions and clarifications on any other topic under the sun.

Someone asked what is the best advice Gregor can give for those starting to join the competition circuit.  His advice was very practical:  warm up correctly.  He pointed out that once you’ve loosened up and sweated out, you are just going to fall in the groove when competition starts.  It doesn’t make sense to be tired from a 5-minute round; you’ve rolled longer than that.  You’re tired because you didn’t warm up correctly and your body is tight, forcing its way to the roll.  If you warmed up correctly, say an hour or so before you compete, you go into the mat as a well-oiled machine.

Gregor also explained his perspective about competitions.  He said winning and losing are mere consequences.  What one should be concerned about is if he/she competed well.  Were you a good competitor?  Did you give your opponent a challenge?  Did you give your best?  If the answer is yes, then whatever the consequence may be — win or lose — you got what you came for in that competition.  You’ve competed and you did it well.

At the end of the class, Professor Jamal thanked Gregor for gracing his school.  Did I mention they go way back?  Like I said, in jiu jitsu, you gain a family FOR LIFE.

I wish more students took advantage of this opportunity, to learn from a seasoned fighter.  It’s not everyday you get to have a Gracie correct and complement your form, give you life advice and praise your performance.  Perhaps more schools should communicate with each other more, so that they are aware of every seminar and visit that can benefit them in more ways than you can count.

We probably wrapped up a little after 3 in the afternoon.  Looking at the GPS, it would take us 3.5 hours to get to Maryland, and we’ll probably arrive closer to 8pm.  Maybe we’ll be late for dinner, maybe we’ll hit traffic at Delaware.  It didn’t matter.  It was totally worth it.