Le Beau’s flight back to NJ was quick, albeit bittersweet, but one of the first things he told me when he got home was this movie, Boyhood.  Filmed over the course of 12 years, Boyhood shows the ups and downs of growing up in the eyes of a child.  With my weekend spoiled by an illness, I had some time to burn, and I must say the perspective was the perfect view. 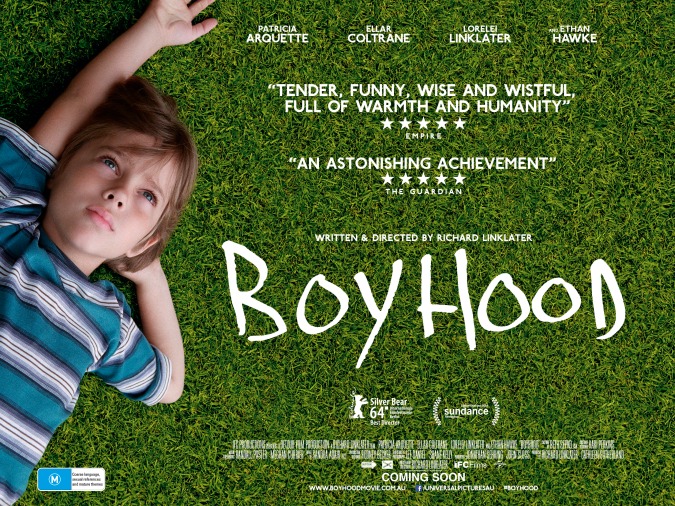 The movie starts with young Mason Jr. (Ellar Coltrane), Samantha (Lorelei Linklater) and their mother Olivia (Patricia Arquette) spending a night in.  Five minutes later, you can immediately tell how good it would be.  I was not in the least bit disappointed.

Enter Mason Sr. by Ethan Hawke, whom I first loved in Dead Poets Society.  Playing the then-absentee father, he builds quite a unique bond with his kids.  The scenes of their weekends, campouts, car conversations and Facetime sessions are nostalgic for me.  Hawke was charming and genuine — if you have an absentee father and he copied this manner of rekindling, it would absolutely definitely work.  Throughout the film, he became Mason Jr.’s confidante, with majority of the life revelations stemming from conversations with his father.

Two drunken step dads, numerous move ins and outs, the film clearly reflects the true ties that bind:  family.  It was a revelation to see how this all played out through a child’s eyes.

Patricia Arquette was a gem.  She reminded me so much of my mother, without the single mother part.  There was a line she uttered somewhere at the end of the film, “I just thought there would be more.”  For some reason, it stuck to me, the truth and reality of how it feels seeing everything pass you by so quickly.

The film is riddled with so many great songs — folk, country, rock, alternative, you name it.  Richard Linklater knows his music.  The easy flow of the film, the riveting conversation, the aging of each character, every bit of it was a masterpiece, making it feel like 2 hours and 45 minutes is not enough.

It was the kind of meaningful, deep, thoughtful conversation that reminded me of Before Sunset.  You would want for it to be more, but at the same time, it would end exactly when it needs to.

Catch Boyhood before it reaps Oscar acclaim, so you’ll know exactly what they’re all raving about.