(Please note that all of the photos for the next few posts are taken by me and my brother Ted.  Anyone who would like to use these photos, please shoot an email to let us know where you’ll be using them.  Courtesy please.  Thanks! *grin*)

Day 3 started reaaaaaaally early.  Mon had us up before the sun rose.  The ride to the safari was pretty long.  Like 2 hours long.  Not kidding.

It was the first time I saw the sun and the moon at the same time.

This was taken at about 5 in the morning.

There was something really amazing watching the sunrise.  The colors were perfect, the warmth was welcoming, and matched with the breeze from the water, well, it is just divine.

A view like that must be documented.  And documented well.

On our way to Calauit Island, where the Calamian Reserve is, we saw the whale island.  Ted was able to capture it perfectly.

Entrance to the preserve is PHP 200 per head, and PHP 1,000 for the safari jeep that will take you around the area.  You will be given a guide — ours was Orlan — and they will talk a lot.  There are a lot of fruit trees there and they let you climb them so you can pick some to bring back to the resort.

We got PHP 50 discounts by the way, for being government employees.  The reserve is managed and maintained by the LGU.

I get it now why Mon wanted us to be early:  when we got there, every single zebra and giraffe was eating and feeding.  So they were literally at arms reach.  Naturally, these are not tamed animals so Orlan had to constantly remind us that we have to maintain particular distance.

Compare these animals to the animals in Manila Zoo.  ARE YOU KIDDING ME?  They look so healthy, especially the zebras’ butts!  I wanted to slap it coz it was so fat.  Hahahaha.  Orlan said Manila Zoo was asking for a zebra to be shipped there, but they have always refused because they were uncertain as to how they will care for the animal.  The condition was to bring the Manila Zoo animals to Calamian for rehab and treatment (since most of them show a lot of signs of depression, stress and malnutrition) so that the Manila Zoo will have ample time to redesign and/or find a better location for these animals to roam and still be exhibited.  After that condition was laid to the table, nothing else came. 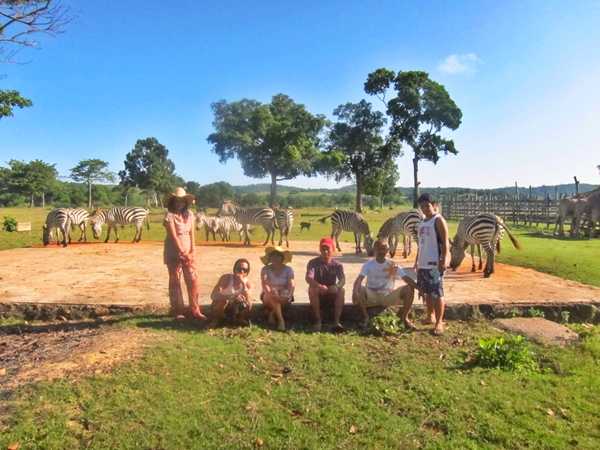 Calamian Wildlife Reserve was patterned to the African Reserve. This project started at the time of Marcos, but just like any of his projects -- both bad and good -- development halted once his administration was ousted. Erap was the only president after Marcos who wasn't able to visit this place. I wonder if PNoy has visited already. This is actually a really good project. It's stupid and immensely egoistic to not continue developing this area.

Here come the perfect zebras!  How do you determine the ladies from the men?  The ladies have lighter stripes.  So if the men have black, ladies have a dark brown hue.

The giraffes were feeding too.  Orlan was quick to gather their favorite leaves so we can feed them ourselves.

Giraffes have really beautiful eyes and really strong tongue.  Orlan warned us that they regurgitate.  So yeah, when we noticed that they’re full, we started backing up.  Iba na ang sigurado.  Hahahaha.

We thought we’d take turns feeding but Orlan brought over so many branches that we all started feeding them right away!!!  It took us about a minute to realize NO ONE WAS TAKING PHOTOS.  Hahahaha.  Imagine our panic.

Of course our parents also wanted to feed them.  Mother was like, “LOOK!  TAKE A PHOTO IT’S EATING!!!  HURRY BEFORE IT TAKES ME!!!”  Yes.  She’s exactly like that.  Hahahaha.  Father was brave to give the giraffes a kiss.

Look at their eyes!  So glassy.  And their lashes are just aaaaaah. :)

We rode the top of the safari jeep when we went to the next stop.  We saw the zebras again, but I think we moved too close too fast because they went to their attack pose.

Here are the rest of the animals:  porcupine, wild boar, meerkat, turtles, and a deer thingie.  Yes I forgot.  Is that even surprising?  Anyway, I asked why there were no carnivores.  Orlan said importing carnivores — tigers, lions etc. — would also mean paying for highly trained caretakers.  Also, all the animals are free roaming the area; they’re not sure nor are they equipped with the knowledge and skill in maintaining the balance of the food chain.

Right after the safari, we went to the island opposite that direction and bought fresh crabs.  I think the family is tired of it already, but to be honest, I can eat this everyday!

Our next stop was Black Island.  It was about 45 minutes away from where we bought crabs and we were going to have lunch there.  So this is what Mother did with the camera.  I HONESTLY DO NOT KNOW how to comment on these photos.  My mother is a hilarious lady.

Trivia about the Black Island:  The government is claiming it to be theirs, but the people inhabiting the island — the Tagbanwas — are one of the first Palawenos.  They have inherited this land from their ancestors.

There are not much photos taken, mainly because the sun was up and just frying everything.  We spent a lot of time talking to them and cooking lunch.  As it turned out, this is where they filmed one of those Survivor shows.  They shot the entire show for about a month and paid the Tagbanwas PHP 100,000 only.  Damn.  I felt really bad for them, considering the MILLIONS that network must’ve earned from that show.  I wish networks pay inhabitants of their location shows/shoots better.  They’re responsible for making the place so picturesque in the first place.  NAMAN.

Here are some photos in Black Island (or at least as we were peeling away from it).

It’s really black!  Not a shadow or anything.  It almost looked like coal.  Rumor has it they’ll host a pageant here.  They should.  The beach can rival Boracay.

This is North Kay beach but because the tides were low, we couldn’t park the boat anymore.

To be honest, the Busuanga island hop is less enjoyable than the Coron island hop.  Coron is all about the corals and marine life; Busuanga is all about the beaches.  It’s really not that fun to hit the beaches when you are with two adults who are sleepy and tired from yesterday’s activities, and we’re just three.  That is why we plan to come back here with the ENTIRE CLAN.  Whuduuuup.

A lot of people said I didn’t get dark.  Here’s why.