I normally don’t go out.  For some that may seem surprising, considering how loud I am, but really I am more of a sisig and beer kind of person.  Relaxing and just talking in a pub/bar/bistro.  I’m good with a buffet dinner, some drinks, in a good table with couches, ambient lighting and soothing music.

So imagine my surprise when I let my St. Scho ladies drag me to Izakaya last night!  It was a completely different scene for me.  I now I’m old, but yeah.  Hahahahaha.  This was something I don’t usually do.  :)

It all started at Baja Mexican Cafe (?) in Greenbelt 3.

We had fish tacos, soft tacos, spicy chicken quesadilla, beef and chicken enchilada and bottomless drinks.  There are no photos of the food because we were hungry beasts that ate everything that touched the table.

My first dates of the night fresh off work! Czy and Jax, PAL assets. :)

This is how we celebrated a good hard day's work!

It wasn't a joke. We really were that tired and hungry!

We were still contemplating how to get to Cable Car, so we took more photos instead.  Czy started to tinker with my camera and explored the color accent option.  I KNOW!  Hahahahaha.  She’s so cute.  She just kept snapping away!   Here are some of her shots.

It always feels like I'm in between towers with these two!

While walking to Cable Car, Czy and Jax suggested to hang out at Izakaya (Greenbelt 2) while waiting for the rest of the crew to arrive.  Five minutes in, the Jaggermeister crew started announcing their arrival, handing out leis, and free shots!

The dancing ladies started looking for participants for the Jagger submarine challenge and Czy and I looked like this as Jax happily volunteers us.

So after two free shots, Czy and I are now faced with a half glass of Red Bull and a shot of Jagger submerged in it.  Naturally, we did it with ease.

A few minutes of waiting, Jax managed to coax a server to give us seats.  Couch and a good marble table — while still sporting the Jagger leis still — this is how happy we were.

Czy was not ready to let go of the color accented photos!  Since the color accents will only be evident when the selected color is hit by the right amount of light, I used my phone’s LED light (from the camera) to act as our alternative light source.  Yeah.  *geek mode*

So Czy was automatically giddier than usual.

He came bearing gifts!  Or rather, he showed us this gift he got.  We had him tuck it away immediately; the club might think we bought it there and be billed for it!  Hahahaha.  He also found a better way to utilize our Jagger leis.

I could continue to narrate how the night went, but the photos would make a better story.  Soon after Rael arrived, Kittyn followed.  Then Joko (his cousin), Majie and Marj.

I don’t know really when I’ll be able to do this again.  My current workload right now is just pretty overwhelming.  But I have to admit, this is the funnest Friday night I’ve had.  I missed my girls.  Really. 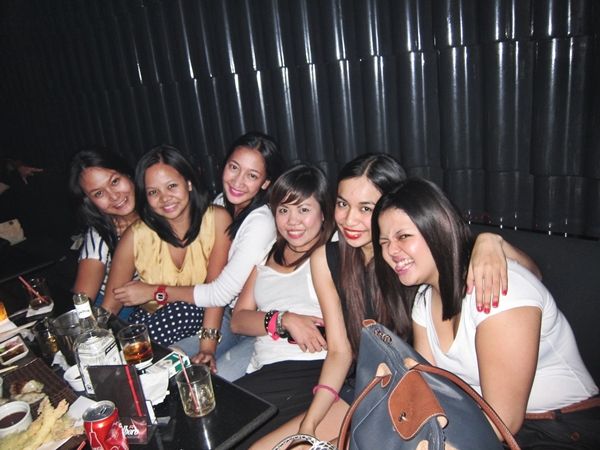